Initiative to counter the skills shortage in aviation

Memmingen, 2nd November 2017 – Aircraft Cabin Modification GmbH (ACM) is cooperating with Allgäu GmbH and taking a new approach in order to draw attention to the skills shortage in the aviation industry. ACM participated in the first Allgäu Job Challenge in which job hopper Annabelle tried out the role of aviation engineer at ACM.

The skills shortage is also omnipresent throughout the aviation industry as well as within associated supplier companies, such as ACM in Memmingen. Positions for aerospace engineers, for instance, continue to be difficult to fill. It is particularly difficult to find such profiles outside of large aviation centres.

ACM is therefore taking a new approach with Allgäu GmbH and participating in the first ever Allgäu Job Challenge, whereby job hopper Annabelle is trying out the profession of aerospace engineer at ACM’s facility. The job hopper was accompanied by radio and television crews at the work site.

Job hopper Annabelle
Annabelle is working for ACM for a few days and is familiarising herself with the products right in the very halls where they are created. She is going through a trainee programme at a variety of workstations, leaning how important and exact the high-quality processing of materials in aviation is. Not only does the low weight of the components play a part in aviation, fire resistance and stress limits of 9 or 16 G are basic components for the certification of the manufactured parts.

Production hall tour
It is impressed on Annabelle that components are manufactured for aeroplane cabins as well as helicopter cabins. Wall coverings, carpets, curtains and seat covers are only a few of the items in the product catalogue. What really stands out, however, is that ACM is the only non-manufacturer of seatbelts in Europe that can refurbish them. This is referred to as ‘seatbelt rewebbing’ in industry speak. “For airlines, it is much less expensive to have us refurbish seatbelts and flight crew restraint belt systems rather than buy new ones!” adds ACM Managing Director Roger Hohl.

Office work with the CAD programme
Part of an aerospace engineer’s job includes office work on a computer. Annabelle’s challenge is to create a carpet for an Airbus in the CAD programme. It is a difficult challenge, but one she is able to master with the help of an experienced ACM employee.

The site in Memmingen
“It is not a disadvantage that the production site for an international aviation supplier is in Memmingen!” states Roger Hohl, Managing Director of ACM, adding: “We are, however, constantly confronted with this question, and it’s true that the search takes longer here in the country than it would in a big city.” But the advantages for both the employees and the employer are clear. On the one hand, there is good transport infrastructure here with the nearby motorway interchange and the airport. Employees also enjoy the work-life balance and the supposedly lower cost of living compared to a big city. “We are very proud to be able to say Made in Allgäu / Germany, Engineered for the Sky!” concludes the Managing Director Roger Hohl.

Aircraft Cabin Modification GmbH (ACM Aerospace) from Memmingen is extremely popular with its workforce and 94 percent of them would recommend their company as an employer. The biggest employer review platform in the German-speaking region – kununu.com – and the Focus Business magazine have presented ACM Aerospace with corresponding awards, thereby recognising the company for its excellent employment conditions. 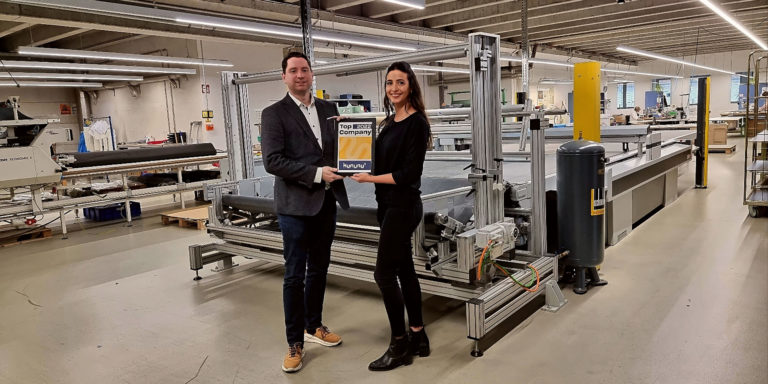 The largest employer rating platform in the German-speaking world - kununu.com - has awarded ACM Aerospace (Aircraft Cabin Modification GmbH) from Memmingen with the Top Company Seal 2022. This makes ACM one of the most popular companies on kununu.

This website uses cookies to improve your experience while you navigate through the website. Out of these cookies, the cookies that are categorized as necessary are stored on your browser as they are essential for the working of basic functionalities of the website. We also use third-party cookies that help us analyze and understand how you use this website. These cookies will be stored in your browser only with your consent. You also have the option to opt-out of these cookies. But opting out of some of these cookies may have an effect on your browsing experience.
Necessary immer aktiv
Necessary cookies are absolutely essential for the website to function properly. This category only includes cookies that ensures basic functionalities and security features of the website. These cookies do not store any personal information.
Non-necessary
Any cookies that may not be particularly necessary for the website to function and is used specifically to collect user personal data via analytics, ads, other embedded contents are termed as non-necessary cookies. It is mandatory to procure user consent prior to running these cookies on your website.
SPEICHERN & AKZEPTIEREN
DE
DE
EN